On our drive to Town yesterday, we saw a Badger (with a capital B, because Badgers deserve our respect)! I’ve never seen a Badger before, which is surprising, since there are plenty of them around here. Apparently we don’t run in the same social circles. 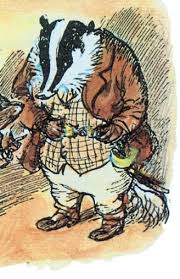 This one was carrying a dead rabbit that was half his size! Quite an accomplished Badger-Dude. Sorry I didn’t get a picture, but this E.H. Shepard one from “The Wind in the Willows” is much nicer, anyway.

I promised I would read up on badgers, and I’m glad I did. They’re pretty fascinating creatures, although I believe some of my sources, like Wikipedia, may be promulgating some badger myths. Some of this stuff is hard to believe… but here are a few random bits of information I found:

First of all, I solved the mystery of how the badger I spotted caught his rabbit. Badgers are “fossorial hunters,” which means they capture their prey underground, by digging. Imagine being a sweet little bunny, and having Mr. Badger, with his shiny sharp teeth, invade your cozy burrow! Nature is not always kind. 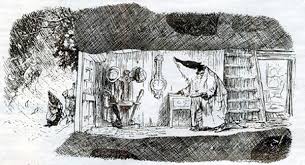 The badger probably couldn’t have captured the bunny in a footrace. Cottontails can reach speeds up to 30 miles per hour, while the badger’s top speed is about 19 m.p.h.. In full gallop, a Badger resembles an animated rug, undulating rapidly across the prairie.

According to Wikipedia, dachshunds were originally bred in order to capture badgers in their dens. I find it hard to believe that a dachshund, or even a tough little earth-dog like the Jack Russell terrier, could budge a badger who didn’t want to be budged. 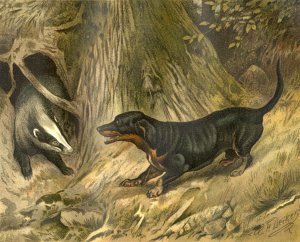 When pursuing ground-dwelling rodents, badgers are reputed to place objects across the entrances to a burrow in order to imprison their prey. This makes them tool-users, like chimpanzees, and smarter than your average bear.

While European badgers are sociable, American badgers are generally solitary. This makes sense to me, as they have a curmudgeonly air and appear to be perpetually grumpy.

Some sources claim coyotes and badgers hunt together, and a recent sighting published in “Wyoming 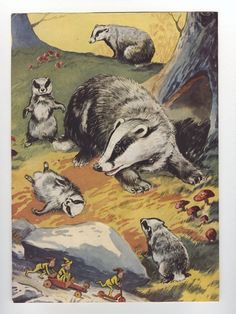 Wildlife” seems to confirm this. However, they’re probably not actual hunting buddies. More likely, the coyote is hovering around the badger’s hunting grounds, hoping some badger-prey will escape and shoot out of a burrow into the coyote’s waiting jaws. As I said, nature is not kind! Especially when it comes to bunnies.
Badgers typically enlarge the burrows of gophers and other diggers, rather than building their own homes. They’re definitely near the top of the food chain, and taking full advantage of that position. However, coyotes, wolves, and eagles have been known to enjoy a Badger McNugget on occasion.

, I’m a little worried Chloe might become a Puppy McNugget if she persists in digging out every burrow she finds. One of these days, she just might find a Badger. Hopefully, she’ll know enough to leave it alone! 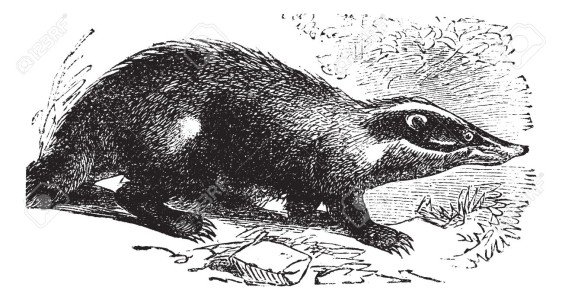