Stillwater Diary, January 22, 2017
We had company for breakfast this morning! 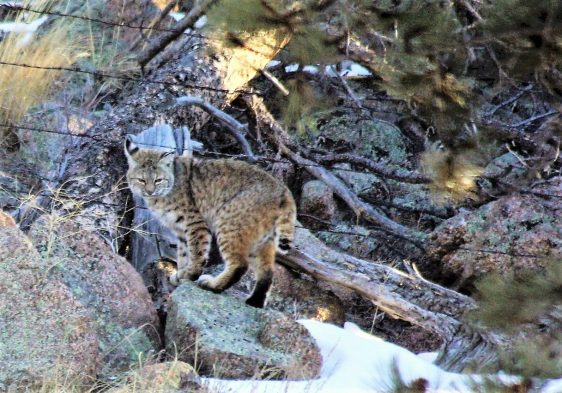 We were surprised to see even one bobcat in such open ground in daylight, since bobcats are primarily nocturnal. We occasionally see them at a distance, but only one at a time. Today, we had four, traveling in single file across the hillside.
This is puzzling, since bobcats, like most wild cats, are solitary animals. The only explanation I can think of would be a family group, although there was no size disparity at all. 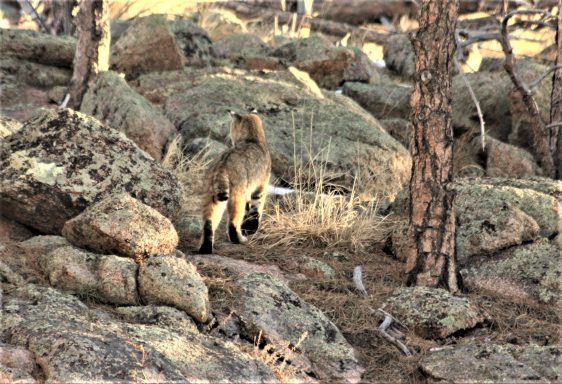 Bobcats mate in late winter. Kittens are born about two months later, and remain with the mother for 8-11 months before she evicts them from her territory. So if this is in fact a family, the kittens are about to get a rude surprise when Mama turns on them and tells them it’s time to get out on their own. 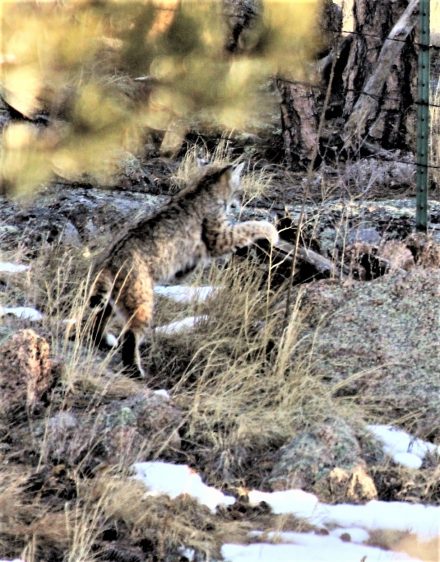 In any case, it was a privilege to see them. They’re beautiful animals, and useful, too. Much as I love our little squirrels and bunnies, that population has to be controlled, and my previous method wasn’t very efficient.
I spent half the summer catching chipmunks and mice in a Havahart trap and relocating them over the stream and up the hill. I made the trek once or twice a day. The “Squirrel Workout” was a nice alternative to Zumba, but somehow I’m pretty sure those relocated critters found the bird feeder smorgasbord again.
This new system is my preferred method of vermin control. Who needs mousetraps, or even barn cats, when you have a bobcat squadron on the job?
NOTE :Lately, I hesitate to put up photos of our wildlife, and I may have to stop. I love to share the privilege of seeing these beautiful animals lately, but in Wyoming many people’s first reaction on seeing a wild animal is to figure out how they can kill it.
This makes me worry that I’m putting animals in harm’s way by posting photos. Our land is private, but poachers have no respect for boundaries or hunting laws, and there are a lot of them out there. 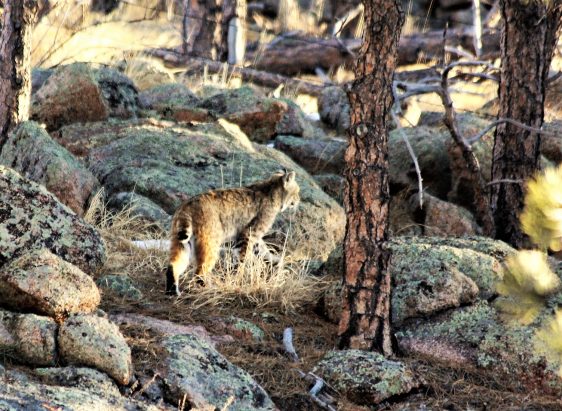 I support hunting for food, and feel eating wild game is kinder to animals than supporting factory farmed meat.
I also understand defending domestic livestock from predators, but there are ways to protect livestock that prevent predation, and killing an animal who’s tempted by an unsecured chicken coop should be a last resort. Bobcats can get through a surprisingly small space to get at a chicken or piglet, so one inch wire mesh is essential. Solar powered motion lights can also help.
What I don’t understand is trapping. I can’t bear to even think of the suffering an animal goes through until it’s found and put out of its misery. And nobody’s going to eat a wild cat.
I know this make many of my fellow Westerners roll their eyes. And yes, I’m a bleeding-heart tree-hugging animal lover.
I know they’re not kittens and puppies, but wild animals, and I realize nature can be cruel. Animals starve if populations explode. But I also know that nature, left on its own, keeps things in balance, and I feel a bobcat or mountain lion has as much right to kill a deer as a hunter – maybe more.
Here at Stillwater, we’ve made a place where wildlife can be left alone, to survive or not, as nature intended. Our little sanctuary is my own response to Koyaanisqatsi, the out-of-kilter state of the modern world.