Stillwater Diary, March 1, 2017
It was Magic Hour at Stillwater–the time of day when long rays of late-afternoon sun turn the landscape to gold. Big, soft snowflakes were dancing on the breeze, teasing and sliding, spinning and playing in a ray of golden light that struck them, setting te stage as suddenly as a spotlight. Snowflakes sparkled silver and gold, creating a real-life snow-globe storm that spun in a column of light.
I knew I wouldn’t be able to capture it on camera, so I stood and stared, memorizing the quality of the light, the sway of the branches, the swirl of the snowflakes. It looked as if an ethereal lady of light, robed in diamonds, was dancing alone in the woods. It felt as if God’s finger had touched the earth and made it glow. The sight was a secret told only to me, one that could never be repeated. 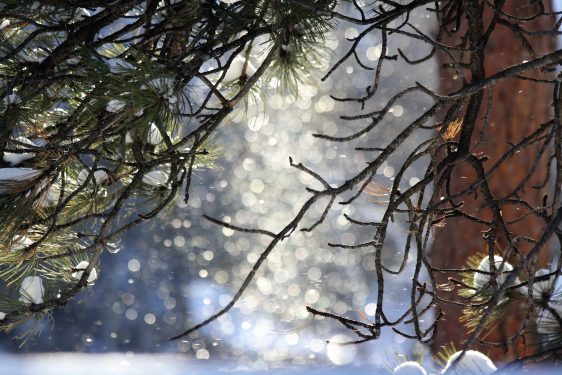 I finally tore my eyes away and raced for my camera. I had to try. Messing around with the controls, I did my best to capture some trace of the magic. I took dozens of photos. This is the best.
It doesn’t come close to what I saw, but maybe, meshing it with my words, you’ll see the flights of sparks and pinwheels, the silent carnival of light, spinning while standing still.
Sometimes I wonder if this world has turned me into an embarrassment. I’m compelled to announce to total strangers that “Magic is real! It’s everywhere! Just look!” But maybe this foolishness is a gift. Every story needs a holy fool– a character with a slightly off-kilter view of the world who tells the truth with no concern for consequences. Somebody has to do it, right? That’s what I tell myself.
So stop and look–really look--at anything: a horse in a field, a baby’s smile, water flowing over rocks. Then look a little closer, and closer still. Stare until you see the truth: that every moment is unique and precious, a gem made out of time. The light falls with that certain slant just once, and just for you.
The most precious moments of our lives seem ordinary on the surface. They slip away, unnoticed, scattered as we race against time, chasing money and careers, romance and adventure.
All the while, magic surrounds us, ephemeral and fleeting, alive for mere moments and too often thrown away.