February 20th was a cold, windy, snowy day, but I try to get the dogs outside at least once a day for a rousing game of fetch and an energetic walk. Today I was determined to make it an expedition, so I filled my pockets with my new i-Phone 6+ for the sake of its camera, doggie bags, doggie treats, and plenty of tennis balls.

Our first stop was to check on the Beehive. Normal woodpiles get blown over in our Wyoming winds, so Scrape designed this stable stack of cut, split firewood. It keeps things neat but allows enough air spaces for the wood to season so it can provide next year’s winter warmth. 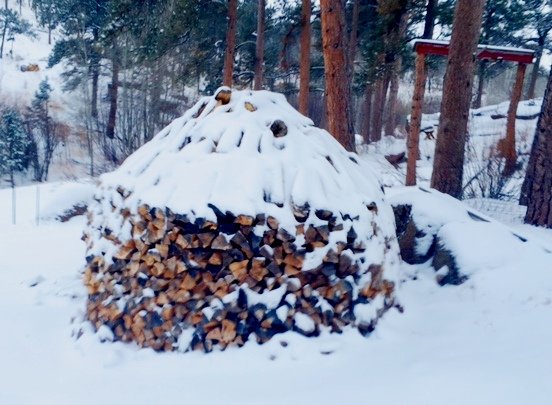 Unfortunately, some local critter was constantly pawing through the pile for the mice who hide there. We think it must have been a bear, since no other animal could wreak such impressive destruction! Although we haven’t seen bears here yet, we know they’re here; we’ve seen their tracks, and the previous owners showed us scratches where one came up on the deck and tried to snag a birdfeeder for a midnight snack. Scrape rebuilt the pile twice, and now it seems to be safe. Maybe the culprit is hibernating.

The dogs love their walks! I bring along plenty of fetching supplies, so Chloe won’t get distracted and run off. Here, she’s waiting for me to throw a ball. Every dog needs a job, and Chloe thinks fetching sticks and balls is hers. We do it every day. The exercise helps keep her wild Jack Russell temperament on an even keel.

Jesse loves to play fetch too, although he prefers fetching the ball and chewing it up to the part where he has to give it back. He looks angry here, but that’s just Jesse; he’s a big old lump of love who looks like he’s liable to take your arm off.

He’s very hard to photograph. I get lots of compliments on his shiny brindle coat and his unusual amber eyes, but in photos he tends to suck up all the light. And photographing a white dog and a dark one in the snow is really a challenge! 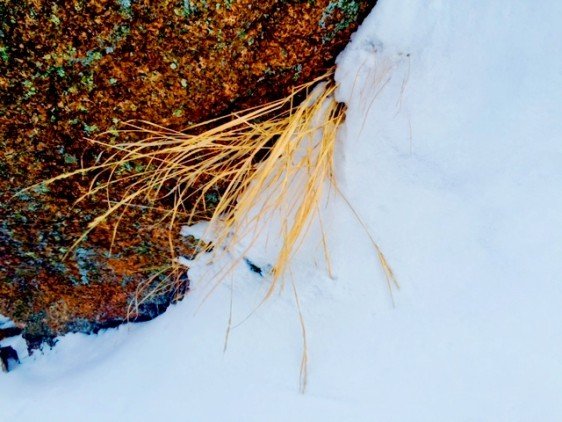 One of the things I love most about living at Stillwater is the evidence of how hard delicate flowers and grasses struggle to survive. It’s inspiring to see how they claim a safe niche as their own, finding sustenance in our rocky soil and drinking up whatever sunshine happens to fall there. This grass looks dead, but in springtime it will green up and grow, creating seeds that will fly on the wind and start their own struggle.

My planned expedition was cut short by my cold fingers and Chloe’s frozen toes. We arrived home after about a half hour. Naturally, Earl the cat was at the door to greet Jesse, and cleaned some of the snow off his feet. 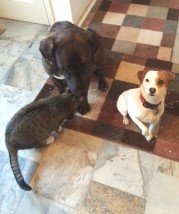 Chloe, on the other hand, wasn’t quite done playing fetch. (She never is!) You can see in these photos that she knows, she just knows,  that there’s a ball in my pocket.

She’s right. And it’ll stay there until next time – tomorrow, no doubt, when we’ll face the elements again. This time, Chloe’s wearing a sweater and I’m going to find warmer gloves!

And now, it’s back to the keyboard! I’m finishing up the edits on How to Wrangle a Cowboy. I made some changes earlier in the book, and of course anything you change resonates through the entire story, so it ends up being a big job that requires a lot of attention to detail. Still, it gives me a chance to finesse the writing as I make the changes, and I’ll have a better book in the end.

And I can’t complain. The view from my desk is pretty amazing, and this birdfeeder will attract feathered friends from all over to keep me company. It feels as if I’m working right in the midst of the wild things, and it’s as inspiring as it is – well, distracting! 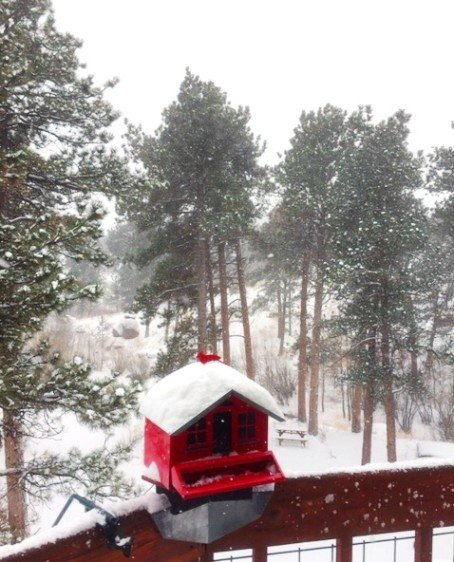