Tuesday night around 5:00, a storm whipped up. There was lots of thunder and lightning, and gradually the raindrops got bigger… and bigger… and bigger. And harder. And colder. And then ping-pong balls were falling from the sky.

The timing couldn’t have been worse. Every year, Cheyenne has a “Neighborhood Night Out” party. Every neighborhood throws a block party on the same night, and it’s kind of a contest to see who has the coolest neighborhood. Last year, my neighborhood had a children’s parade, tons of free pizza, and liv 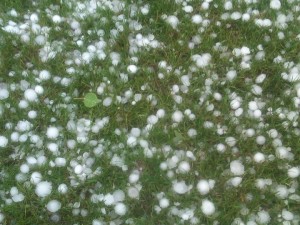 This year, we had hai 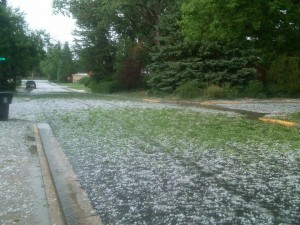 The storm lasted about fifteen minutes, but when God flings ice cubes at you, it hurts! It also wreaks havoc on anything left outside. It starts with no warning, and you can’t run out and move your car into the garage. So my Subaru, the automotive love of my life, is bashed up and dimpled like a golf ball. The insurance company, which has no concept of the true value of a beloved, reliable old car, called me yesterday to tell me the repairs would cost more than the car is worth. So it looks like I’ll be driving a bashed-up car for the next ten years, because there’s no way I’m giving up 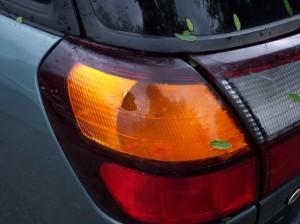 Nothing stops our neighborhood from partying, though. Once the hail quit, the tents went up, the kegs came out, and Todd Dereemer and friends set up and played for us. The police brought over a K-9 dog who made my dogs look like absolute hooligans, and Scotty’s Pizza delivered a stack of pizza pies about five feet high.

And we all stood around and talked about the weather!