This is our new kitty. 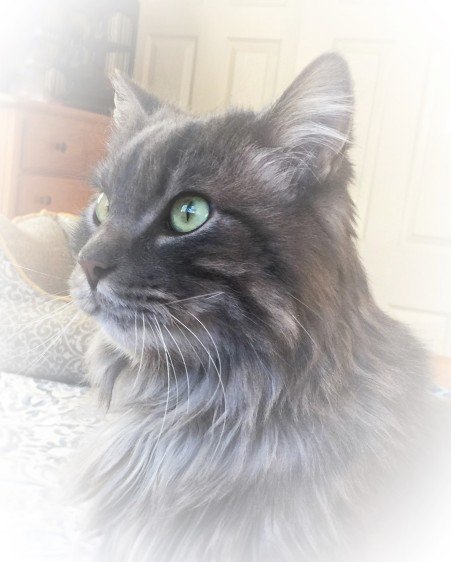 Pretty, isn’t he? Too bad he doesn’t have a name!

It was easy to name Earl, because the name came before the cat. I was looking for an Earl, and found one.

This handsome fellow was named Baloo in the shelter. That’s a perfectly good name, except that there was already a cat named Baloo in my life. Although Baloo has passed on to the great mousehunt in the sky, he’s probably still watching, eyes narrowed, tail twitching, hoping I don’t give away his name.

So I need your help naming “The Kitty Formerly Known as Baloo”. He answers to “Kitty, Kitty,” so I don’t think he’ll mind a change.

Take a look at this list. Let me know in the comments which names you like, or suggest other names. Your recommendations will help a great deal, so random books will be sent to random responders. I have lots of copies of the new book, so your chances are good!

A good name has some meaning, so explanations are given where needed.

Blue – Closest to his original name, Baloo, and also short for the next name.

Bloomers – because of his magnificent pants as seen in the photo.

Booger – Because Scrape insists on calling him that so much he’s got me doing it, too!

Burma Jones – after the character in Confederacy of Dunces who was forced to endlessly mop floors to avoid being arrested for vagrancy – because Kitty looks remarkably like a mop.

Buster – Because of his great beauty, many people mistake Kitty for a girl. He doesn’t like that, and a masculine name might help.

Captain Underpants – because, again, those bloomers! Such an inspiration. We could call him The Captain, which has a nice ring to it.

Curly Fries – Because nobody has a cat named Curly Fries!

Fiddy – Because he’s gray, and there are fiddy shades of it.

Pompatous – Because he speaks of the pompitous of love, and he gets his lovin’ on the run. And Scrape likes to wake up to the Steve Miller Band.

Snuggleupwit’us – A corruption of Snuffleupagus, the hairy elephantine oddity from Sesame Street, because our boy is very, very snuggly.

rations, not that travesty of a movie!), and just because it has a nice ring to it.

Virgil – Because that was the name that came to me when I saw him in the shelter. He’s a very tall cat, and all that fur was kind of tangly and standing up, making him look rangy and dangerous. Now that he’s all brushed out, he looks somewhat less Virgilally.

There are more names. In fact, we may be enjoying the naming process a bit too much! Please help our nameless kitty and be a part of this crowd-sourcing cat-naming experiment – and maybe you’ll get a book!

The Cat with No Name thanks you in advance for your help!