I constantly worry that the dogs, sweet as they are, will give in to their instincts and hurt or kill some wild creature. I try to keep them close, but as you know, I’m easily distracted by everything from moss to interesting stones. That’s why they were out of sight when trouble started on our walk yesterday. A rasping, grating sound like an old car trying to start rose from the stream, louder and louder. It took me a moment to realize it was the frantic call of a bird in distress.

Scrape and I blew our whistles for the dogs as we raced toward the sound. The pups obeyed, thank goodness, and we discovered a Great Blue Heron, in all its long-leggity glory, struggling in the stream. Apparently, it had caught one of those long legs in some tangled tree roots, and panicked when the dogs approached. Now he stood motionless, staring at us with those piercing yellow eyes, furious and dignified and scared.

What to do, what to do. I wasn’t about to try to free the bird myself; I might hurt it, and I have no doubt it would have hurt me. If you’ve ever watched a heron fish, you know how fast they move. That long, stabbing beak goes right through a fish; I’m not sure what it would do to my arm, but I didn’t want to find out!

Fortunately, the bird freed itself, but despite our presence, it only walked about two feet down the stream. While Scrape put the dogs inside, I shot these photos as quickly and quietly as I could. Despite the winter weather, it’s breeding time for herons, and it was possible this one had a nest nearby. Herons are easily disturbed and will abandon a nest to predators, so we decided to leave it alone for a while.

We hoped the bird would be gone when Scraped checked on it later, but it was still there, still motionless, still dignified.As Scrape watched, the bird upchucked a bit, which was more evidence in favor of a nest. Herons feed their chicks partially digested fish, and we wondered if this one had been interrupted on his way to a feeding. 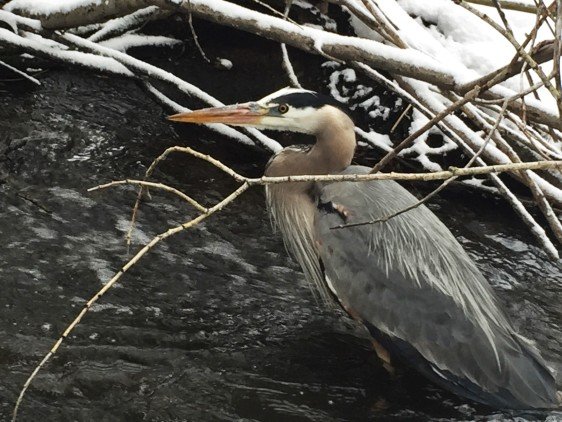 Now we were really worried. What would we do if he was hurt? It was time to google the game and fish department and hunt for bird rescue groups.

We decided to give the heron a little more time before calling for help. Although it seemed odd that it didn’t fly away at our approach, it didn’t act distressed and the dreadful cries had ceased.

When we checked again after another twenty minutes, the bird was gone. Just gone. I was watching that part of the creek from the house, and I never saw it fly away, but somehow it disappeared. Hopefully it went back to its mate and got in trouble for being late to dinner. “I don’t care if there were a dozen dogs! I’m stuck on this nest all day, incubating these eggs, and I was looking forward to a nice meal of regurgitated fish!”

We saw no more of the heron that day, but this morning, when I set out for our usual walkabout, I was greeted with its rasping call as soon as I approached the area where we’d found it.

Now we have an problem. I did some research and discovered that while herons normally nest in colonies, high in the trees, a pair occasionally nests alone, in bushes or even on the ground. Great Blue Herons aren’t endangered, but their numbers in some areas of Colorado have dwindled due to too many humans, coming too close to their nests.

So for the moment, we’re avoiding a big swath of our usual walking trails. Aspen Alley is off-limits, along 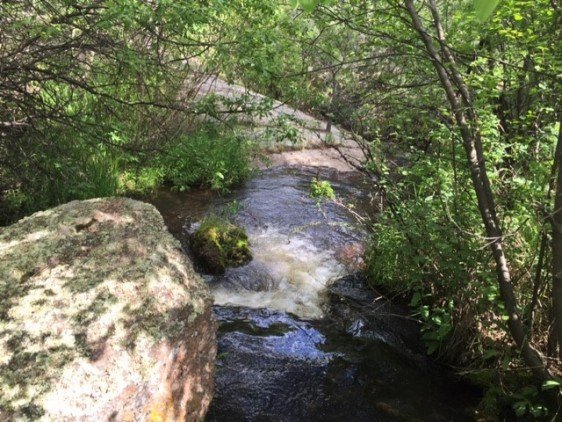 with our best bridge and the wildest, most interesting part of Box Elder Creek. We’re also keeping the dogs even closer so they don’t revisit their “friend.”

How did this happen? I should be the boss of me, not some crazy bird!

But Stillwater isn’t just land we own; it’s a habitat we share with wildlife, and in return they make our lives richer and bring us closer to nature.

So for now, a long-legged bird-brain owns a corner of Stillwater. It’s inconvenient, but when I see a great gray shadow overhead, neck folded and long legs trailing, I’m proud to be a part of keeping our resident heron safe.