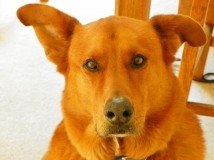 If you’re a dog person, you probably see life as I do—as a series of stages, each defined by the faithful companion that accompanies it. Sometimes it seems like there’s a cosmic casting agency that chooses the right dog for the right time—one who can support us through the bad times and add resonance and meaning to the good ones. In the best animal/human relationships, the dog becomes a part of you, as essential as any limb or organ. You read each others’ minds. You share a heart.

I had that kind of relationship with Taz. I found him—or we found each other—at the Cheyenne Animal Shelter over ten years ago. I was just visiting, or so I told myself. Just checking the place out.

But when the clerk asked me what I was looking for, a fully formed description leapt from my lips. It was almost like I’d thought this through.

ctive dog. He needs to be calm and quiet, the antidote to my Jack Russell.”

I needed an antidote to my Jack Russell because I was living alone for the first time in ten years, and I had too many reasons to be afraid of the dark. My marriage had just ended, and not well. There were threats, recriminations, worse threats. I couldn’t understand how I’d become afraid of someone I’d once loved.

In any case, little Libby was just a puppy, and she’d catch my tension and ratchet it up a notch, handing it back with a shiver I answered with a twitch. We spent  our nights in an ever-tightening spiral of fear that usually ended with the two of us cowering under the covers.

When I explained this problem to the girls at the shelter, they cast knowing looks at each other.

“She needs the Love Bug,” one said.

The other nodded sagely. I felt like they were consulting physicians who’d diagnosed my weakness with a glance and were agreeing on the perfect prescription for what ailed me.

But “the love bug?” Seriously? I didn’t need a love bug. I needed the canine version of the Terminator.

The dog they brought out was hardly a bug, loving or otherwise. His paws were the size of my hands, gripping the slippery tile floor with nails as big and black as pencil leads. Sturdy tree-trunk legs led up to massive shoulders that hulked over a head the size of a basketball. His coat was a rich, resonant red with black guard hairs sprouting from an apricot-colored undercoat soft as cotton puffs. He looked like a cross between a grizzly bear and a pony, and his expression had all the dignity of a circuit court judge.

She produced a leash and all his big-dog dignity vanished, replaced by a crooked grin of pure joy. As I clipped the leash to his collar, he snatched the other end out of my hand and walked himself to the door, his head held high as he pranced out a snappy, syncopated happy dance that rivaled Snoopy’s.

We stepped outside into a hushed winter landscape. It was March, and a light snow had been falling all evening. The shelter was situated at the edge of town, and it was dark and silent on the open plains. My new friend fell in step beside me as easily as if we’d walked this walk a hundred times. We were instantly a unit. Us against the world.

I slowed, then stopped. He stopped too, and leaned hard against my leg. I reached down and kneaded his shoulders. We fit together, my hand brushing his collar. I felt comfort wash over me, a warm wave of love.

My dog, I thought.

But I knew such decisions shouldn’t be made lightly. I was trying to shed the weight of the past, and this dog was almost as big as my ex-husband. Was I being too impulsive? I’d brought a friend along to keep me from doing anything stupid. As soon as I walked in, he knew what I was thinking.

“I know.” I shoved my hands in my pockets and tried not to meet his eyes, or the dog’s. I didn’t want anyone to know what I was thinking.

“You don’t normally keep dogs that long, do you?”

“No. But he’s our Love Bug.” She reached down and stroked his crooked ears.

I made it halfway home before I had to turn around and go back.

Taz was always a canine contradiction in terms, a powerful beast mincing around the house on tippy-toe so he wouldn’t slip on the hardwood floors; a hundred-pound behemoth who bowed before the snarling posturing of little Libby. He was a gentle goofball who probably would have died to protect me.

On walks, he was much admired by the tattooed, leather-wearing, pit bull-leading crowd, but he was a lover, not a fighter. I’ve never seen an animal who so loved to be touched. Driven bonkers by affection, he’d swoon against you in throes of doggy passion and refuse to let you pass until you’d fussed over him sufficiently. We called it “paying the toll.”

He was the ultimate partner, probably the dog of a lifetime. Do great dogs come along when we need them? Or do circumstances bring out the best in our canine companions and make them great? Most important—will I ever have that feeling again, that link to an animal’s heart and mind?

I never knew Taz’s true age, but I watched in amazement as the years rolled by without touching him a bit. Five, ten—no white muzzle, no illness, no injuries. It wasn’t until this past year that arthritis struck, eating away at his hindquarters and leaving him unable to climb stairs or enjoy our long walks.

It finally got to the point where he couldn’t find comfort anywhere. He’d turn in endless circles, trying to get up the courage to lie down. Finally, he’d lower himself to the floor with a groan. Not even a “petting session” was enough to ease the pain.

I had to let him go. It’s been three days, and I know I’ll never get over it. I’ll miss him forever, and that’s okay. It was worth it.

Today, spring has sprung in Wyoming. The sun is shining in a robin’s egg sky, the birds are clattering in the hedge, drawing me outside. I’ll go for a walk, my Jack Russell trotting by my side.

I’ll miss the Love Bug, but he’s not entirely gone. My heart aches, but it’s whole in a way it never was before he came into my life. The strength he gave me is still there, a gift from the dog of a lifetime.