Wyoming winters are both better and worse than you’d expect.

Whenever I tell someone I live here, they say “Oooooh, the winters” – as if they know I’m suffering terribly from October to March.And they’re right—but not because of the cold, or the snow. Generally, our  below-zero, snow-infused days are followed by sunshiney 60-degree days that melt the frozen mess into a brief mud-season morass, then dry it back to normalcy.

The problem is the wind. Winter, spring, summer and fall, the wind is a force to be dealt with in Wyoming.

Today, for example, we were headed north on I-25 for late Christmas with Scrape’s daughter and grandboys. We heard the weather reports. We knew there was a storm moving in. That’s why we put new tires on the Subaru.

At 9 a.m., we steeled ourselves with Egg McMuffins and plunged into the ticker-tape parade of falling snow, headed into the frozen North.

We were barely out of Cheyenne before we realized we were in trouble. The wind sweeping across the highway was creating a near-total white-out. We could barely see the hood of the car, let alone the road.

I’ve often heard about car vs. snowplow accidents, and wondered how a sober driver could hit something that enormous and slow. It would be like stumbling over a Galapagos tortoise during a brisk walk over the islands, right? But we very nearly hit the back of a plow before we even saw it. The wind blew, the snow blanked out our windshield, and when it cleared, there they were—snowplow taillights, inches from ourfront bumper.

So we joined the stately interstate parade, falling in line with a few WalMart trucks and some woefully unprepared pickups and panel trucks. We couldn’t turn around; it’s a divided highway. We couldn’t turn off the road; there were no turns. Or at least, if there were, we couldn’t see them. We finally plugged in the GPS to find out if any exits were coming up.

Like hikers in an avalanche, we made a survival pact (the bargaining stage of grief). If we lived to see the Chugwater exit, we’d turn around and go home and we’d never, ever do this again.

But when we reached Chugwater, we realized that turning around meant going back through the white frozen hell we’d barely survived. Moving on actually seemed like a safer option.

It was the right decision. The weather cleared just outside of Casper, and we even survived the sidetrips where Scrape insisted on diving onto dirt roads so I could get some good pictures to illustrate this post. 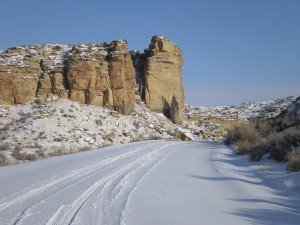 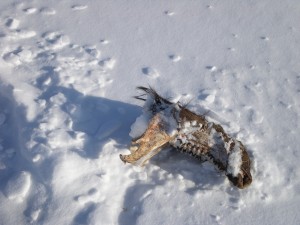