Welcome to Winter Storm Valerie! She dumped over two feet of snow on our budding gardens and greening grass, setting records for late snow accumulation. It’s always a little sad when snow interrupts our spring celebration, but sad things can be beautiful. In our little valley, a storm can cut us off completely. Roads become impassable, and phone and electric lines fail. We become, for a few days, survivalists. It’s fun, as long as there’s an end in sight.

Still, I feel sorry for my garden! You saw a photo of it in the last post. Now, it looks like a slightly lopsided wedding cake, with a little hand poking out of the top and waving. “Help!” says the little twig. “I thought it was supposed to be spring!”

But when nature takes one thing away, she always gives something in return. In the case of spring snowstorms, that thing is BIRDS. Hundreds of birds! The winter ones are still working on their travel plans, the spring birds have procrastinated a little too long, and a few other confused souls are wondering why the restaurants are so crowded. 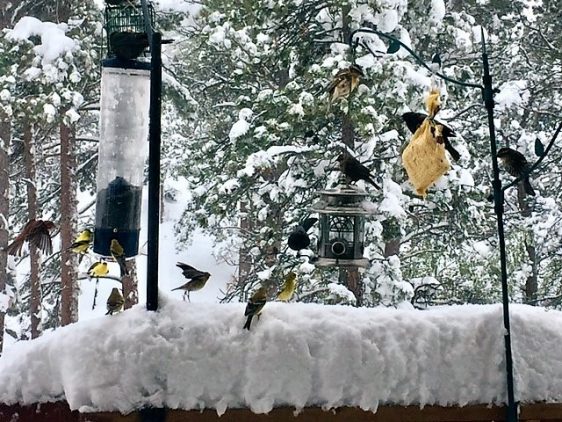 Robins are always a good sign, but we haven’t seen any yet in the mountains. Our first harbingers of spring are always the red-winged blackbirds, who greet the season with creekside parties where they chat and clatter in the willows, occasionally shouting out a harsh cong-a-ree! that resets my attitude and lightens my heart.

The Goldfinches have been here all along, but during the winter they’re pale little pea-green birds. As the weather warms, their feathers turn to gold. Maybe it’s the contrast with the dark pine trees, but I can’t help feeling our goldfinches are brighter and more beautiful than any I’ve seen… 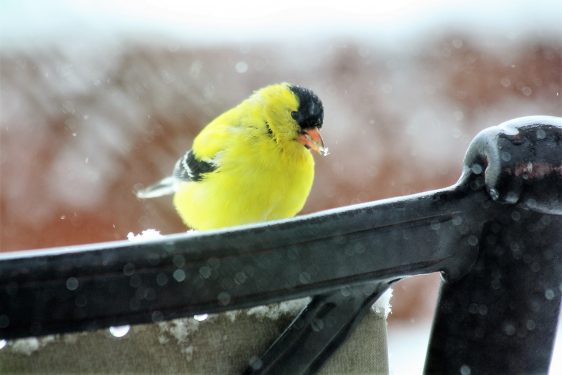 …and they congregate in vast numbers, flitting around, perching in the pines, and checking us out through the windows like friendly little fat men. 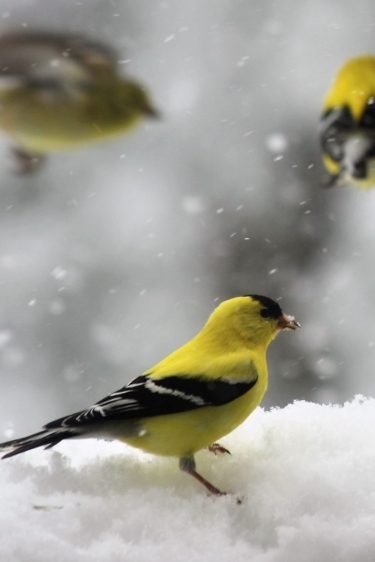 Another sign of spring is the arrival of the Black-Headed Grosbeaks. The females of the species are very obliging about being photographed, while the males, who are much more colorful, always seem to set themselves against the light so I can’t get a decent photo. But here is Lady Grosbeak, who is quite fetching in her spring finery. 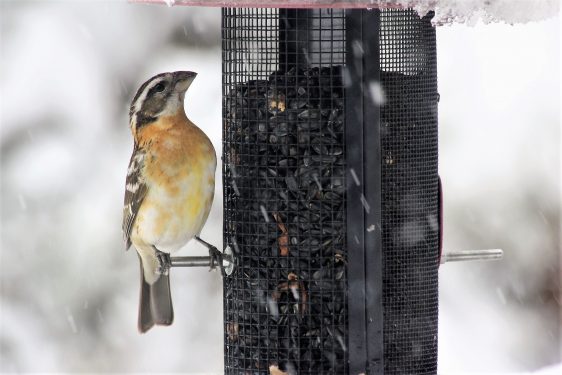 We also had Evening Grosbeaks this year, along with many other species I didn’t manage to photograph.

I love catching clear photos of the sparrows, because a freeze-frame lets me differentiate the various species. When they’re fluttering around the feeder, they all look alike, but a closer looks shows this is a Chipping Sparrow. He’s so puffed up in his feather parka that he’s almost unrecognizable. 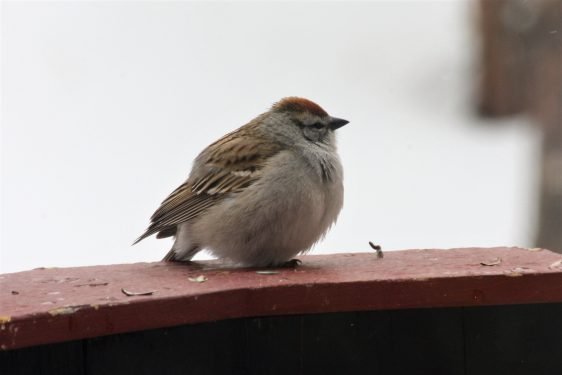 I’ve saved the best for last. I’m always excited to see a new species at the feeder, and I was absurdly thrilled when my husband, who was watching out the window with me, said, “Hey, look at that guy over there. He’s got an orange head!” 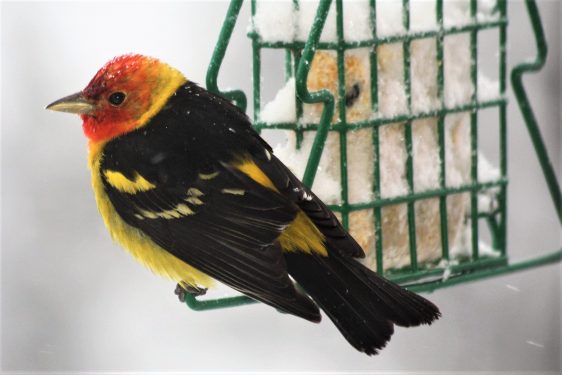 He’s a Western Tanager! I’d heard he was in the neighborhood, but this was the first time he came down to our little feeding station. He’s made many visits since, and been joined by a friend. Let’s take a few more looks at them, since I took forty million photos!

Last but unfortunately not least, this inconspicuous brown bird joined the tanager at the suet rack. I had a little trouble identifying this one, mostly because it has hardly any markings at all, but I had help from a friend of a friend who knows virtually everything about birds (I’d thank you in person, but I don’t have permission to publish your name). She identified this lady as a brown-headed cowbird, which isn’t particularly good news. 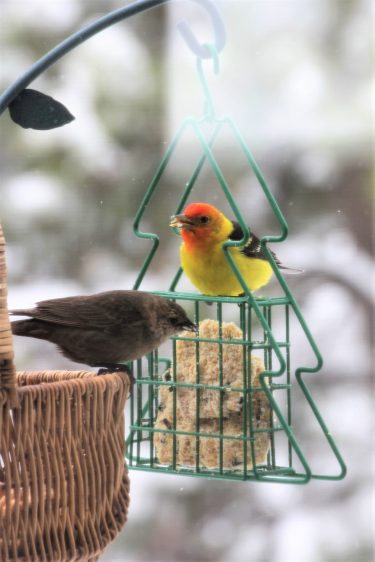 Cowbirds are, in the words of my friend, “not nice.” They lay their eggs in the nests of other, smaller birds when the mama bird isn’t looking. When Mama returns to her nest, she accepts the cowbird egg as her own–but when it’s time to hatch, the cowbird baby is much larger and greedier than his adopted brothers and sisters, taking most of the food and often pushing them out of the nest.

Cowbirds are natives, unlike other beaky pests like starlings and English sparrows, so I suppose they’re part of the plan. I’m hoping this one moves on; maybe she already did, because I haven’t seen her since. That would be good news for the little birds.

Thanks for sticking with me while I babble on about the birds. They brighten up our long winter days just by being here, and make late spring blizzards like Winter Storm Valerie an event to celebrate, rather than a disaster to be endured. They’re a big part of the reason there’s always a bright side at Stillwater.