A few days ago, the Colorado weather service spotted something puzzling on their radar maps. It looked like this:

Obviously, something strange was going on. A huge raft of something was passing over Colorado, creating a moving radar blob that was 70 miles wide.

They’d seen birds before, and this wasn’t birds. It wasn’t UFOs, either, which is kind of disappointing. No, when the weather experts got together with the nature experts, they identified the blob as an enormous butterfly migration. This wasn’t too surprising; everyone knows butterflies migrate. Monarchs leave the U.S. every year, heading to Mexico, where they hang in trees in massive numbers.

But these weren’t Monarch butterflies; they were Painted Ladies.

As they flitted through Colorado, fortifying themselves with nectar from flower gardens along the way, they were often mistaken for Monarchs. But Painted Ladies are smaller, and have lovely chocolate-brown underwings. 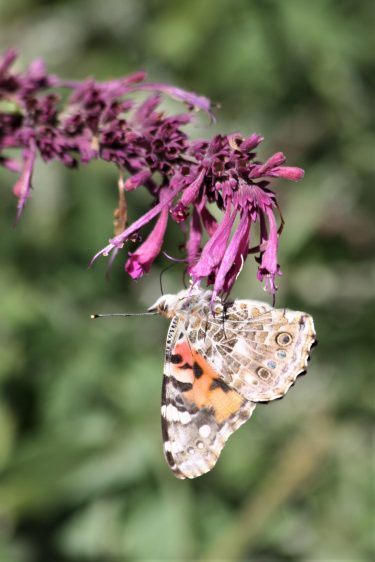 Like Monarchs, Painted Ladies migrate annually, but their numbers normally don’t attract attention. No one seems to know why they’re so plentiful this year; most sources I’ve found say they must have had a successful breeding season, but don’t explain why.

I wonder if the scarcity of Monarchs has anything to do with it. The Monarch population has declined by over 90% in the past twenty years. Their caterpillars depend on the milkweed plant for food, and that plant has been decimated by herbicides like Roundup, which is used on crops like soybeans that have been genetically modified to tolerate its poison.

While Monarchs and Painted Ladies don’t compete for the milkweed plant, they do sip nectar from the same flowers–so maybe the absence of large flocks of migrating Monarchs has allowed the smaller Ladies to thrive.

Whatever the reason, we had dozens of Ladies at Stillwater, sipping from the hummingbird mint and enjoying the fading blooms of my sage and catmint plants. As I passed the garden, I had to move slowly to allow them to fly up from the grass and avoid being crushed.

I was amazed. We had four inches of snow just two days before. I’d mourned the scattered Ladies I’d seen before the storm, assuming they’d either moved on, or perished in the cold.

These creatures seem so delicate and fragile. I’m amazed they survive even sunny summer days, so watching them take over the garden after the snow melted was a study in wonder. Apparently butterflies can sense a coming change in the weather, and either take cover or fly out of the storm system.

Knowing they’d survived so much, I was horrified to see little Biskit happily hunting butterflies. She loves to chase and eat grasshoppers, and thought these tasty morsels would be a nice supplement to her diet. She was sternly spoken to, and had to Sit and Stay while she kept me company in the garden.

Now, the butterflies have moved on. We’re due for another storm, with temperatures dropping into the twenties and a possible 6 to 9 inches of snow. But according to the Denver Post, they probably laid some eggs, so we’ll host Ladies again in April and early May.

I had a particularly good year in the garden. My sage and agastache plants bloomed profusely, and by deadheading the plants I was able to get three full blooming sessions out of all of them. I was glad to have something to feed these long-distance travelers, and look forward to hosting them again in April.

But I’ll always remember the stunning surprise of seeing dozens of butterflies right after the year’s first snowstorm. I’ve learned to expect the unexpected at Stillwater, and it reminds me how much I love this crazy, unpredictable, beautiful world. 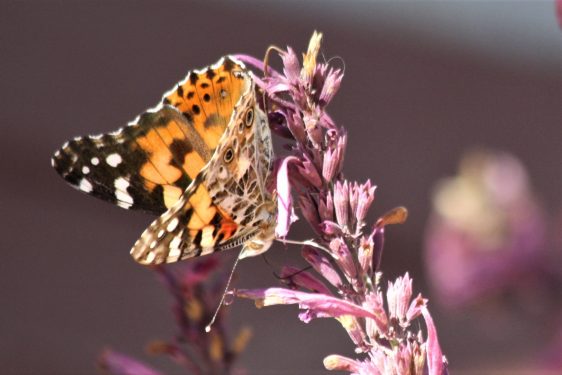