This quote from Sylvia Plath’s journals is a peculiarly accurate description of what it feels like to be a writer:

“I love people. Everybody. I love them, I think, as a stamp collector loves his collection. Every story, every incident, every bit of conversation is raw material for me. My love’s not impersonal, yet not wholly subjective either. I would like to be everyone—a cripple, a dying man, a whore–and then come back to write about my thoughts, my emotions, as that person. But I am not omniscient. I have to live my life, and it is the only one I’ll ever have.”

I suppose it’s kind of creepy, because I’ve just admitted that you’re all part of my stamp collection (insert maniacal laughter here.) But  readers are much more to me than stamps!

As a reader, you’re my partner in storytelling. Without you and your imagination, my words would be meaningless. You’re the one who brings the story and its imagined characters to life. You hear my characters’ voices and see their faces; my words flow into your mind, where you stitch the story into the fabric of your  own life,  blending your unique experiences with my story to create a world that’s uniquely meaningful to you.

Take the photograph above. It’s just a suggestion of a cowboy. You can’t see his face, but you can draw certain conclusions about him. He’s quite masculine, but well-groomed; he’s  a man of a certain age; and the tilt of his head, modest yet somehow determined, reveals a lot about him, even as it hides his eyes. Despite that tilted hat, most of us can conjure up the rest of his face quite clearly, but every viewer’s picture of that face will be unique–a composite of friends, acquaintances, and strangers.

The same goes for setting. It’s important to describe the essential elements of a scene to make the picture in your mind vivid and authentic. But if I offer too much detail, I rob you of a truly immersive, collaborative experience and make it harder for your to participate in the story. It’s the feeling of joint creation that makes a book really engrossing. Rather than forcing you to see my precise vision of the story, I want you to create your own.

An artist I admire once told me the most important skill in painting is knowing when to put down the brush and hand the canvas over to the viewer. When grass or sky is painted in a vague but evocative scribble, the viewer completes the picture and becomes part of the creative process. That’s one reason Impressionist paintings are so intoxicating. The artist expresses the light and sketches the scene; we fill in the details in our minds. The artist is talking with us, not to us.

Robert Crais, author of the Elvis Cole mystery series, made this point in a workshop I attended. During a question-and-answer session, someone asked why his books had never been made into a television series. Crais, who has written widely for TV, said he feels that portraying his characters on the screen would break a compact with his readers. He knows every reader pictures Elvis in their own way, and he won’t pull them out of the story by inserting his own vision.

He has a point. Have you ever pictured a Tom Cruise type as the lead in a story, only to discover Brad Pitt has been chosen to star in the movie? It’s jarring, and it makes the character feel less real. Remember the kerfuffle over the choice of actors for 50 Shades of Grey? Readers were extremely upset when an actor was chose who didn’t match their concept of the character.

This happened to me with Craig Johnson‘s Longmire series. I was thrilled when his books were made into a television series, but when I tuned in to the first episode, not one single character looked anything like I’d imagined. They may have looked exactly like the author’s mental image of the characters, but they weren’t mine. 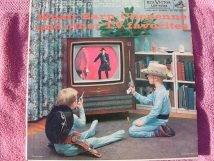 and has become one of my favorite shows. I love Johnson’s books, too, but the two kind of clash in my mind.  As I read, I have to reconcile the two images of the characters, and it keeps me from being quite as engrossed in the story.

So far, I haven’t had to worry about all this. No one from Hollywood is knocking on my door, although Cowboy Trouble was once under consideration with a producer for a delightfully long time. Nothing came of it, but it

was fun to imagine how Luke and Libby would look on the big screen. Sorry, readers, but I’m not as honorable as Robert Crais. Given the opportunity, I would have betrayed you all, and tripped over my own feet cashing the check.

But I write books, not screenplays, so the partnership between reader and writer is central to my craft. It’s my job to sketch the outlines of my handsome cowboys and spitfire cowgirls, while you fill in the rest of the picture. That way, you share more deeply in the emotion of the story–and everybody gets the cowboy of their dreams.

What book-to-television adaptations have you enjoyed? Are there any movies where you feel the producers got the characters all wrong?