Since my next book was delayed by health issues, I’m going through previous stories and pulling out scenes I think you’ll enjoy and providing background on the places and real-life events that inspired them.
It’s a trip down memory lane for me, reacquainting myself with past cowboys and the women who love them, and revisiting some of my favorite Western places. 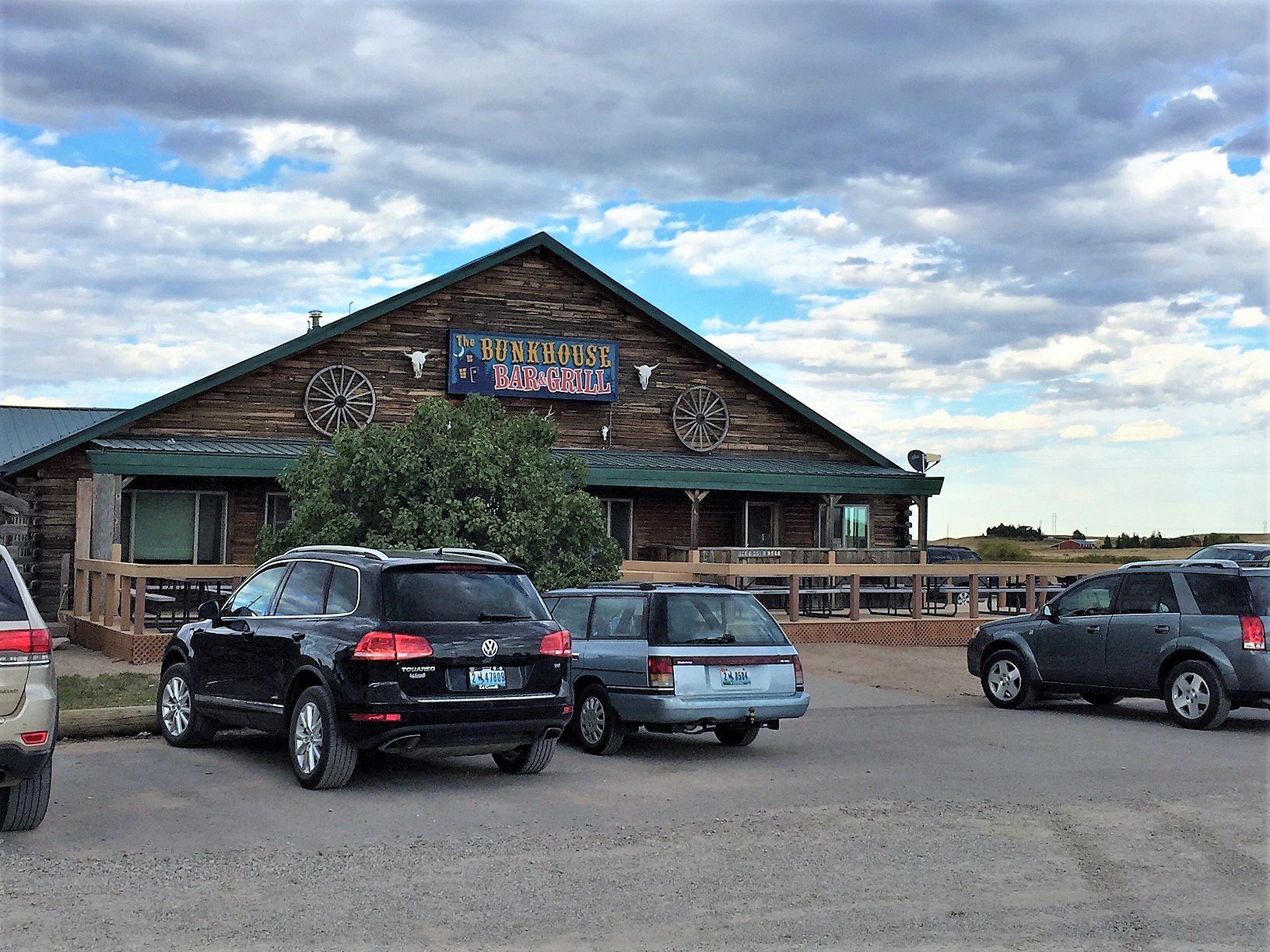 This is the Bunkhouse Bar and Grill, which was featured in my first book, “Cowboy Trouble.” That novel was a collection of everything that baffled and amused me about the West, tossed lightly with a mystery and liberally doused with romance.
The Bunkhouse is is the bar where my heroine, Libby Brown, first encountered the Mikes – Big Mike, Mean Mike, and Crazy Mike. It’s also where she shrugged off sheriff Cash McIntyre’s advances and set the plot rolling.
At the time I wrote the book, the Bunkhouse was really struggling. It had been for sale for years with no takers; the same few ranchers were always bellied up to the bar, and the tables sat empty. We used to stop in after hiking at Vedauwoo and admire the taxidermy. I’d tease my husband about ordering “sissy drinks,” and we’d indulge in my favorite activity: eavesdropping on other people’s conversations. 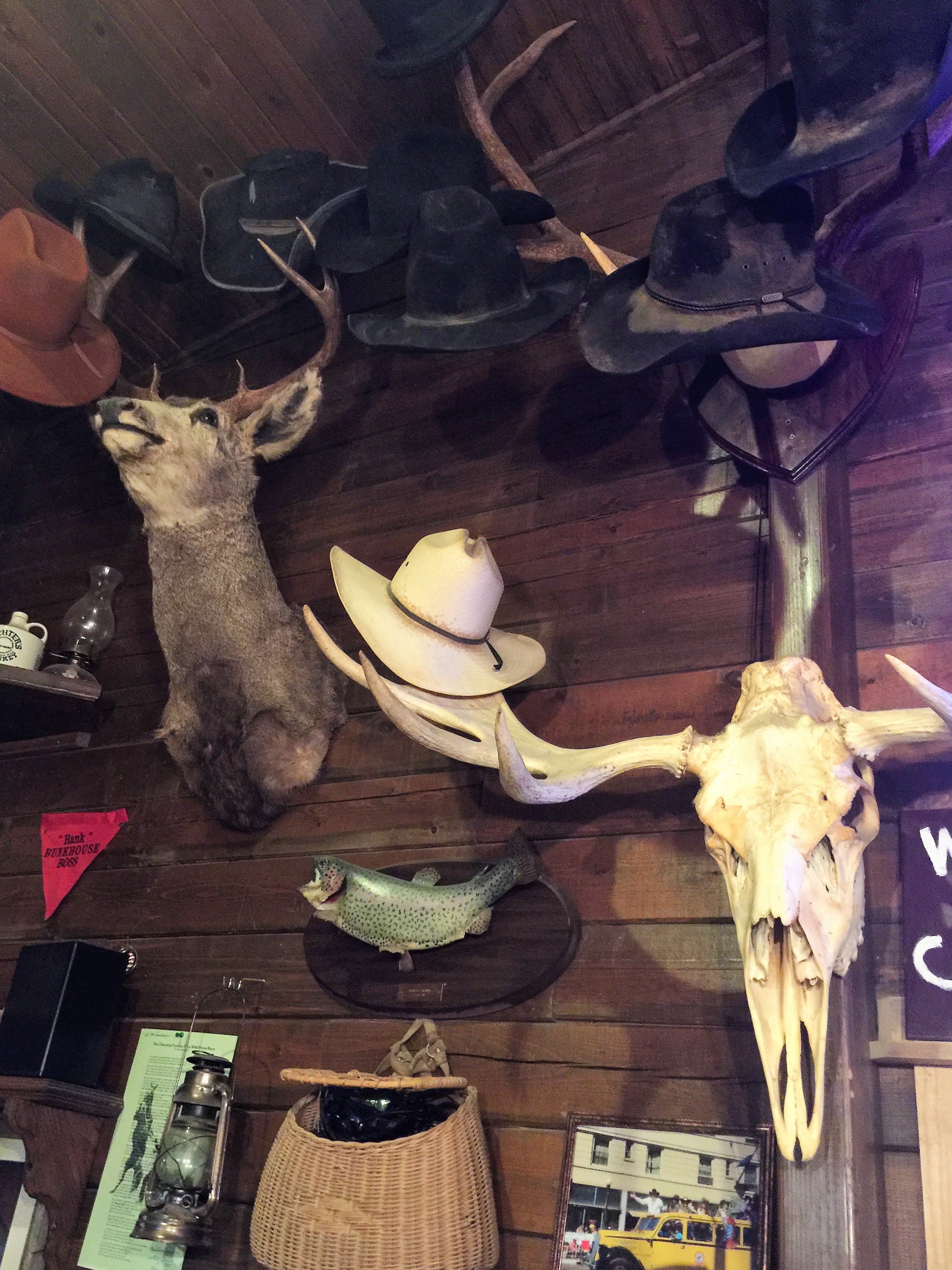 Then it changed hands and became a restaurant. Soon after, Cheyenne banned smoking indoors, and suddenly, the Bunkhouse, which sits just beyond the city limits, was packed with people. Smoke drifted above the pool tables in massive clouds, and every barstool was occupied.
Things have calmed down now, the smoke has cleared, and the Bunkhouse has become a great place for a meal. Their Chicken Fried Steak is legendary. So is the taxidermy.

So in honor of those olden days, here’s the first Bunkhouse scene from Cowboy Trouble.
Stepping into the dark saloon from the bright Western sunshine, it was hard to see the men seated at the bar. Libby squinted to make out a row of cowboy hats and baseball caps above frosty mugs clutched in calloused hands. One fellow had an artistic depiction of a chainsaw tattooed on his biceps. Another sported a P.E.T.A. cap: “People Eating Tasty Animals.” An attractive dark-haired woman presided over the beer taps.
“Hey, Luke. Long time, no see,” she said.
“Hey, Crystal.”
Luke guided Libby up to the bar with one warm hand resting gently on the small of her back, radiating a subtle but palpable heat to all the most sensitive parts of her anatomy.
“This is my new neighbor, Libby Brown. She bought the old Lackaduck ranch,” he said. “Libby, this is Crystal Hayes. She knows everybody and everything in Lackaduck. You want information, just stop by the Roundup.”
Crystal nodded a brisk hello. “Nice to meetcha.” She turned and gestured toward the bar. “These guys are the Mikes. That’s Big Mike, Mean Mike, and Crazy Mike. The guy at the end is the sheriff.”
The sheriff stood to shake hands, and Libby threw Luke a dirty look. This guy was no Bubba. He was tall, at least six-five, and looked like a California surfer, with blonde hair and pale blue eyes set in an angular face bronzed by the Wyoming sun. Luke was nice to look at, but where Luke was spare and wiry, this guy was solid muscle, with Gold’s Gym biceps and broad shoulders that tapered down to narrow hips. The whole package was wrapped in a brown sheriff’s uniform, topped off by a shiny, star-shaped badge that reminded her of a bow on a really nice birthday present. If looks counted for anything, Lackaduck’s sheriff would catch every criminal in the county.
“Cash McIntyre,” he said. “Nice to meet you.”
Libby looked up into his eyes and smiled. She was almost six feet tall, and men big enough to make her feel delicate and feminine were few and far between.
“Libby Brown,” she mumbled. Staring slack-jawed at the badge on his chest, she searched her mind for something intelligent to say.
“Yeah,” she finally said. “Nice.”
“How ’bout a drink, hon?” Crystal interrupted.
Libby came back to earth as the bartender slapped a cardboard coaster in front of an empty barstool beside Luke.
“What’s on tap?” Libby dropped the sheriff’s hand and turned away so she couldn’t see him anymore. It was the only way she could regain consciousness.
“Coors, Coors Light, Bud, Bud Light,” Crystal rattled off.
“Coors,” Libby said. She, and laid a five on the bar.
“Let me.” Cash pulled a wad of cash out of his pocket and started counting out bills.
“No. Me,” Luke said. His eyes narrowed into a Dirty Harry squint and he drew his wallet like a gunfighter. He and Cash traded a look, and Cash went back to his seat. Libby didn’t want any fistfights starting, but it sure felt good to be popular.
“How ’bout you, Luke?” Crystal asked. She flashed a warning glare at both men. It was clear she didn’t tolerate fights in her barroom.
“I’ll have a Smirnoff Ice.”
Libby turned to him in disbelief. “You can’t order one of those sissy drinks in a place like this!”
Every head swiveled toward Luke. No doubt he’d been branded a pansy forever in the minds of his drinking buddies.
Wait ‘til they saw what he was driving.
“Coors for me, too, then. Light,” Luke decided.
Libby snorted.
“What—, is light beer for sissies, too?”
She was glad he was still smiling after her clumsy teasing and the encounter with the sheriff. She gave Luke five points for being good-natured. Trouble was, Cash got ten points just for standing up.
*** 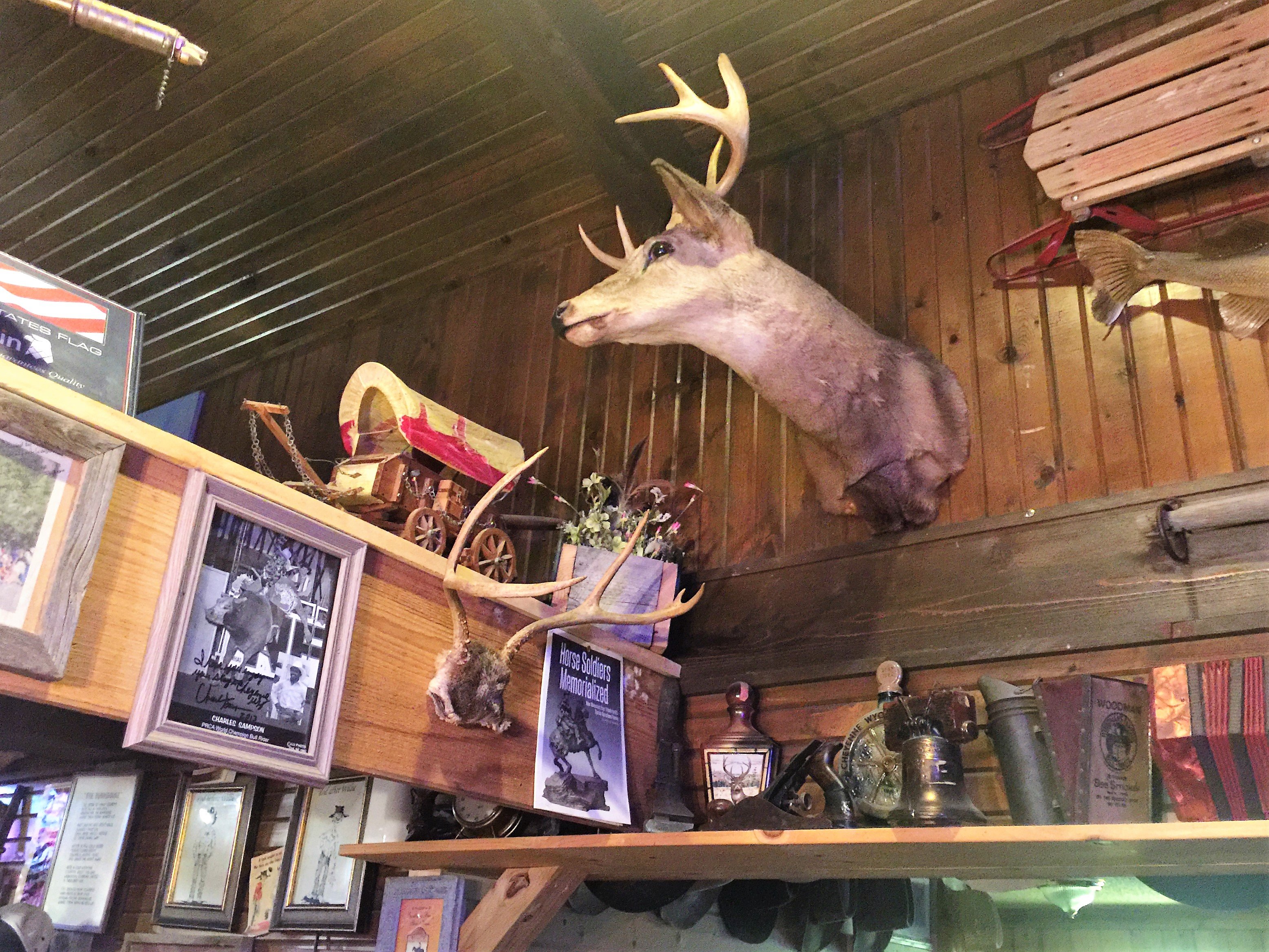