I’ve tried two kinds of book promotion for Cowboy Trouble — the “virtual” kind and the traditional kind. I think internet promotion probably reaches more people with less effort, but traditional bookstore signings are definitely more fun. Especially since I got to return to my old stomping grounds, Billings and Missoula, Montana. 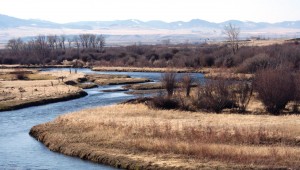 Billings was my first stop when I moved West in 1992, and I started my career with Barnes & Noble there when the store opened a few years later. On Saturday, I gave a talk and signed books for a small group of old friends and new faces. I was especially excited to meet a new friend from Cody who also writes romances. We’re hoping to get together again – hopefully at the Cody Night Rodeo this summer.

After the signing, Scrape and I went out to dinner with old friends I’ve been missing for far too long. It seemed like we were able to pick up right where we left off, and I’m so glad we reconnected.

The next morning, I was suprised to see my picture posted on my friend Kim’s “Big Sky Yarns and Crafts” blog (http://kimknits.typepad.com/my-blog/2010/04/joanne-kennedy.html). If you’re a knitter, Kim is bound to be a kindred soul. If you’re not, visit the blog anyway! She’s one of the most positive, fun people I know, and it shines through in her enthusiasm for her craft.

I was signing in Missoula the next day, so we hit the road and made it as far as Bozeman Saturday night, then continued the trip the next day. It’s a beautiful drive – with the possible exception of Butte. Butte is interesting, culturally rich, and historical, but beautiful might be a stretch.

Missoula is beautiful, though, mostly because some of my best friends live there. We’re doing a little better at getting together with the sensational Laura and her consort The Chadster – we’ve seen each other twice this year! Not enough, but better than usual. And Doris came, and Jack, and Stephanie, who has been busy since I last saw her. She has two adorable babies now, one of them just two weeks old!

Naturally, there was much girlish squealing and excitement (Jack and Chad did not participate in any girlishness, of course). It was possibly the loudest book signing in Missoula history, but with the sensational spring weather ouside, there weren’t many customers to worry about. Rather than giving my usual talk, I connected with a couple of writers individually, which was nice because we could really get to know each other.

We headed back to Billings the next day, stopping at the Bozeman store to see my friend Louise. Two more days with Scrape’s daughter and grandbabies went way too fast, and I’m home now – back to my routine, back to my dogs, and back to my fictional universe with my enthusiasm refreshed and renewed.